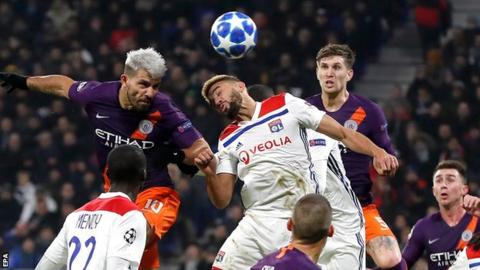 Pep Guardiola says Lyon were “one of the toughest teams” Manchester City have ever faced after the teams shared a 2-2 draw in France.

Lyon twice took second-half leads before City rescued a 2-2 draw which ensures qualification for the last 16 with one game to spare.

The French side wasted several clear-cut chances before Maxwel Cornet rifled in an angled drive to give them an early second-half lead.

City defender Aymeric Laporte quickly levelled with a header but Cornet fired in again to put Lyon on top of Group F.

However, Sergio Aguero reacted quickest to flick in a header two minutes later to ensure City remain in pole position to top the group.

“We are so delighted and so happy,” Guardiola said. “It is a big compliment for the team.

“We played one of toughest teams we’ve ever faced. They are physical, strong, they counter-attack incredible.

“Now we must try to get a point to finish first in the group stage, but it is so important to go through.”

An all round entertainment website, consisting of music(audio, video) and movies download, sports news, politics, celebrity gist, lifestyle and business around the world.

Error-prone goalkeeper, De Gea might be leaving Manchester United as the club focuses on a

Juice comes through with another song and he calls this one, “More”. Stream/download the brand new jam below and let …
Read More