Ronaldo on Higuain’s Red Card: ‘I hope He isn’t punished too severely’

Higuain was dismissed as AC Milan lost 2-0 at home to Juventus, but the Portuguese star defended the Argentinian striker.

Cristiano Ronaldo defended Gonzalo Higuain after the striker’s red card during AC Milan’s 2-0 home defeat to Juventus in Serie A.

Higuain endured a personal nightmare against his parent club, seeing a penalty saved and being dismissed late on at San Siro on Sunday.

The Argentina attacker had to be led off the field after a meltdown following referee Paolo Mazzoleni’s decision to send him off.

But Ronaldo, who scored the second goal in Juve’s victory over the Rossoneri, said Higuain should not be punished too heavily.

“I told him to calm down, as he risked an even worse ban,” Ronaldo said to Sky Sport Italia.

“He didn’t do much, he was annoyed at losing the game. That’s understandable. I hope he is not punished too severely.” 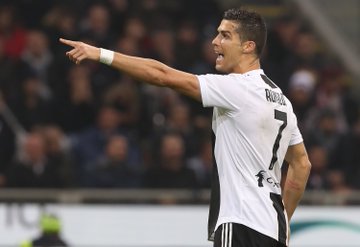 Cristiano Ronaldo has struck six goals in his last seven games for Juventus after scoring in their 2-0 victory at AC Milan.

Juventus bounced back from their first loss of the season, at home to Ronaldo’s old club Manchester United in the Champions League, last time out.

Mario Mandzukic opened the scoring with Ronaldo’s sixth goal in seven Juve appearances clinching all three points for Juve, who have set a Serie A record with 34 points from their opening 12 games in a strong start to their title defence.

“I’m happy,” Ronaldo added. “We won, and it was fundamental with Napoli beating Genoa yesterday.

An all round entertainment website, consisting of music(audio, video) and movies download, sports news, politics, celebrity gist, lifestyle and business around the world.